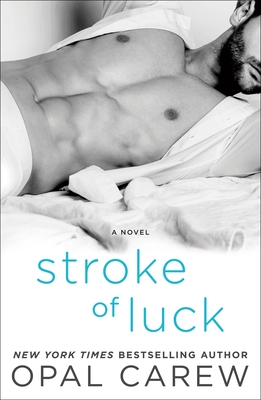 3.5 Stars
Overall I liked Stroke of Luck, and have enjoyed several of Opal Carew's books in the past. There were some things that just didn't click for me, and as a result I most likely won't have it on my re-read list.
April is in Vegas to get married to her manipulative cheater of a fiancé. When she confronts him not only does he call the wedding off but he cruelly has her thrown out of their room and insists that the hotel employees confiscate her clothes, down to the underwear, since he bought them and he still has the receipts. Enter Quinn, the man she dated just before her fiancé in college. Quinn wasn't the tycoon that he is now, and was shattered when April left him, assuming it was because of his money when she started dating her fiancé. Now he is in a position to help her out of this embarrassing situation when he offers to have her stay with him and his business partner, Austin. From there the sparks fly with both of these hot hunks.
What propels this story is the chemistry between April and Quinn and April and Austin. Quinn's feelings are complex because he has unresolved issues of hurt with April but he is still wildly attracted to her and can't stand to see her mistreated. Austin is just a walking smoke show, and sex appeal oozes out of him, but he is also very caring and sensual. The sex scenes are raunchy and fun, with tender moments throughout. I wanted to like this more than I did, but the fiancé's shenanigans took me right out of it. Without spoiling the end I will say that I am glad April finally found herself, but the way things went down was just a bit odd. If you are looking for a hot Vegas romp, this is definitely that! You won't be disappointed in the sexy times, and you will keep turning the pages.
Posted by Miss Boxy Frown at 2:23 PM