Reaper's Legacy by Joanna Wylde
My rating: 5 of 5 stars

It has been a long year waiting for a return to the Reapers MC. It was well.worth.the.wait!

Ruger and Sophie have a complicated history. She got pregnant as a teenager by Zach, Ruger's shitty brother, and Ruger literally delivered her son, Noah, on the side of the road. There was no doubt that Ruger was in love with Noah from that point on, but his relationship with Sophie was more and more complicated over the course of the years.

Sophie was a single mom, doing the best she could. Ruger was always in Noah's life, and by extension Sophie's, since Zach was a deadbeat. Despite Ruger's drop in presence and help, her situation was becoming more and more desperate. Finally, after a dangerous incident when Sophie had to leave Noah with a trashy neighbor to go to work, Ruger moved them both back to their hometown and into his beautiful home.

These two were ridiculously hot. The constant banter was sometimes hilarious, sometimes hot, but through it all, it was a wild ride to be enjoyed. Did I mention that Ruger has a pierced dick? Because he does. Sophie was no shrinking violet, which I love in a heroine, but she was also smart, despite her youthful choices. She needed to always make her own way, and who can't respect that?

I cannot wait for the next in this series, sure to be another sexy, MC lovin' good time!

Posted by Miss Boxy Frown at 10:41 AM No comments: 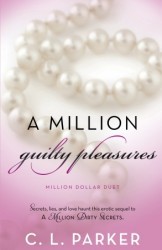 A Million Guilty Pleasures is the followup to A Million Dirty Secrets, and I enjoyed both of these books immensely! We return to the world of Noah and Lanie, and Pleasures picks right up where Secrets left off. Noah, tortured by the news of Lanie's mother's ill health, lets Lanie out of their contract. What neither of them knows is that Noah's business partner David is also business partners with the nefarious Scott, who brokered their $2 million dollar arrangement. Noah and Lanie come together to take on David, who has always wanted what Noah had.

The charm and passion that made the first book a success are back in spades here. Lanie is as feisty as ever, and Noah is as Alpha as always. Here we get to root for their relationship like old friends and smile along as Noah gets to meet Lanie's parents in the most unorthodox way possible. Lanie's crazy bestie Dez is as wild as ever, and while at times she was a bit over the top, it's just who she is, so you take it with a smile. David was a delicious villain, and while there will be no spoilers, just know that he is an egomaniacal asshole. He is mean, he is bad, and pieces of the story are told from his point of view to show you how dastardly he is.

Overall, this was a great followup, and a fitting end to an amazing pair. Noah and Lanie are a raunchy, loving couple and so much fun to read about.


Posted by Miss Boxy Frown at 8:42 PM No comments:

Marked by Lauren Dane Vivian Arend and Kit Rocha
My rating: 4 of 5 stars

This anthology I was lucky enough to review is 4 stars overall, and will have starred reviews for each story.

Another fantastic account of life Beyond -hot and dirty with heart!

Rocky Ride by Vivian Arend
4 stars
This was a sweet and hot story of Mitch, the seemingly bad boy biker, and Anna, a had working constable. These two opposites have been having secret, kinky interludes for a while, but Mitch is getting tired of sneaking around. Despite his reputation, Mitch is a good guy, and wants to show off his relationship with Anna, who is extremely private. Will she let him in, and take their relationship public?

Really enjoyed this one, and am a new fan of Vivian Arend!

All That Remains by Lauren Dane
3 stars
This is the beginning of a new series about a futuristic society where women are scarce and triads with 2 men are commonplace. Summer meets Charlie in her small town, and they click immediately. She has never been in a triad before but is willing to give it a try, until she finds out the other man in Charlie's life is Hatch. She grew up with Hatch and they dated seriously before Hatch decided to see more of what the world had to offer. Will she be able to get over her hurt and find love twice over?

I am a huge Lauren Dane fan, but I didn't connect with this one the way I wanted to. There was plenty of bow-chicka-bow-wow action, but I think I wanted the triad to have more of a connection.

Overall it was a great grouping, and a great read!

View all my reviews
Posted by Miss Boxy Frown at 9:58 PM No comments:

In September, I posted about my most anticipated fall shows-returns as well as new shows. Who are the winners, and who are the losers?

My most anticipated shows, Winners:
BRAVO! These shows have made my fall/winter. I am eagerly anticipating the return of Scandal in February, Mindy in April, and Sleepy Hollow next year. Well done, y'all.

My most anticipated shows, Losers:
Snoozers this year. SHIELD had no chemistry between the main cast members and TVD is tiresome- everyone is an asshole but Damon is the eternal bad guy.

How was your fall line-up?

Posted by Miss Boxy Frown at 6:50 PM No comments:

Before Jamaica Lane by Samantha Young
My rating: 5 of 5 stars

Returning to the crew in Scotland that makes up the Dublin Street gang is like returning to hang out with old friends.

Nate and Olivia have become close friends since she moved to Scotland with her dad, a native Scotsman, almost a year ago. All of their other friends are coupled off, and while Nate is a womanizer, he also holds on to a past pain that besides Liv, not many people know about. Olivia is curvy and insecure about her body as well as her limited experience with men. They decide to strike up a deal where Nate will teach Liv how to flirt and be confident around men.

Nate is smoldering, dark, beautiful, cocky, and sexy as hell. Liv is gorgeous, witty, curvy, sensitive, and passionate. They are a scorching couple and it was so fun to read about them. It was also great to catch up with the rest of the crew, and see where this series is going. Another great read!

Posted by Miss Boxy Frown at 10:19 PM No comments:

Check out my First Look for this book here.


Posted by Miss Boxy Frown at 1:03 PM No comments:

BirthControl by Sydney Addae
My rating: 3 of 5 stars

I finished this second entry into the La Patron series, but it was hard to do. I enjoy the overall world of the series, but the last half of this book was particularly clunky and it was challenging to keep up with the action.

There are more books in this series, but I don't know yet if I will continue the series. I may go back to them, but for now I'm at a good stopping place.

Posted by Miss Boxy Frown at 3:54 PM No comments: