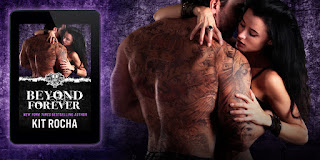 Yes, we all know that the Beyond series is one of my faves.I love the full length novels as well as the novellas and this trip down memory lane is no exception. Beyond Forever takes us back to the beginning of Dallas and Lex, and if we thought they had a bumpy ride in their HEA Beyond Control, we were not ready for the chemistry, heat, and drama in Beyond Forever. This novella is a love letter to the fans of the series, and I'm blowing kisses at Kit Rocha to let Bree and Donna know I love them right back! 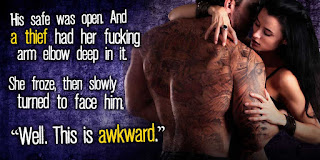 Lex knew who Dallas was when she robbed him. Dallas knew what he was getting into when he felt the attraction to the beautiful and confident thief, and decided to use her talents for his own ends. Pretty soon he couldn't function without her, despite the fact that they weren't together. The O'Kanes were a gang before Lex came to Sector 4, but she made them a family. Dallas fell fast and hard for Lex and I was devouring every page.

Complicated is too simple a word to describe the politics, stubbornness, and attraction that comprised the relationship between Lex and Dallas. In Beyond  Forever we learn about the King of Sector 4 and his rise, but we learn just how instrumental Queen Lex was to making the man, the myth, and the legend.  It was so much fun to see some of our favorite characters who have been with Dallas for so long, and watching them grow up into the people we know and love.

Fans will love and treasure this glimpse into the past, and appreciate the future of Sector 4 even more.

Review: Hate to Want You by Alisha Rai

Hate to Want You by Alisha Rai
My rating: 5 of 5 stars

This book has been on my radar for a while and I devoured it in 2 days when I bought it. Nicholas and Livvy have a long complicated history, and despite family tragedies and small town drama they couldn't stay away from each other. Every year for the past 10 years they have had a standing appointment for a passionate encounter wherever Livvy has been in her travels. Now she is back home and that fire is burning brighter.

This is the first in a series but this book ends in an hea so the next book must be about someone else. Can't wait for that one! *Update* It's about Livvy's twin Jackson. YESSSS

View all my reviews
Posted by Miss Boxy Frown at 3:08 PM No comments:

Dirty Boxing by Harper St. George
My rating: 5 of 5 stars

In Dirty Boxing, the first book in the Blood and Glory series by Harper St. George and Tara Wyatt, we meet a commitment-phobic workaholic and an MMA athlete in a sexy second chance romance.

Go to Heroes and Heartbreakers for the full review!

View all my reviews
Posted by Miss Boxy Frown at 2:35 PM No comments:

I love a good post apocalypse drama, even better when there are romantic elements and intrigue, and Dust and Shadow delivers on all fronts. Set in the dystopian presentish (!), the advent of the Industrial Revolution  brought about climate storms called the Shift. As a result, the small desert town that Jo lives in has depended on her family's farm to survive for generations. The Marshal, the leader of the town, and his cronies keep law and order in the town, but Jo is certain that the evil Marshal killer her mother 11 years ago, and she wants revenge.

There are so many secrets and lies and twists and turns, this was a delight to read.  Sometimes things aren't as they seem, and sometimes they are, and figuring out which is which was so much fun. Jo defied convention as a woman still living in Victorianesque times. She wore pants and tinkered with machines and had tons of ideas about everything - and wasn't shy about sharing them.  Coming from a family of healers on her mother's side, she was also a huge reader and healer herself. Jo's life was turned upside down when she discovers a huge secret and when the Marshal decided that she should marry his son, Clayton, then things were never the same again.

Despite his lineage, Jo is drawn to Clayton but she won't allow herself to act on her feelings to anyone in that heinous family, which means Clayton has lots of work to do, and as he moves from a free-wheeling playboy to a young man with a Marshal title to inherit from his father, he discovers that the town he knew is full of many secrets.

The chemistry between Jo and Clayton is a yearning thing; you root for Clayton and Jo and want them to give in to each other despite the distance, the secrets, and the lies that push them apart. Lindsey Pogue does an amazing job of weaving fantastic storytelling full of twists and turns and romance in a post-apocalyptic landscape. I can't wait for the next installment!

Review: Defending Their Mate: Part One

Defending Their Mate: Part One by Moira Rogers
My rating: 5 of 5 stars

Having read the first trilogy in this series, I was excited to get back into this world and see how Grace was doing. Grace was kidnapped by a bad group of wolves, and luckily for her, she was discovered by the same pack that found Ashley, the heroine of the Protecting Their Mate Trilogy.

Grace is more in touch with her wolf, but she is afraid of her. Having had to defend herself to the death, she is starting to feel comfortable with the wolves but uncomfortable with the fact that she may be a danger to them. She is drawn to Mac and Connor, which makes sense since they are used to having threesomes.

This is classic hot erotica - lots of steamy scenes with super hot guys (wolves!) and a plus sized heroine, which I love. There is a story here, as well, and I can't wait to read the next installment to see what happens. Enjoy!

View all my reviews
Posted by Miss Boxy Frown at 10:57 AM No comments: