In this second book in the Destiny series we have a second chance romance. Duke, the eldest brother of the three King brothers, is back in Destiny when their ailing aunt calls them home. While home, Duke discovers that the woman he was in love with years ago had a son - his son! - that she didn't tell him about. With a 13yr old broody boy just like him, Duke has his work cut out for him, and with a long time love that never went away, he is in big trouble.

Grace's father was against her dating one of those King boys when she was a teenager, but Duke was always good to her and wanted her to be something special; he dumped he when he found out she declined an Ivy League college's admission to stay closer to him. Indirectly, Duke ended up in jail because of her and she thought he hated her. It was never the right time to tell him she had become pregnant with his son.

I like this story even better than the first one; Duke and Grace had perfect chemistry and Grace was a woman who became tired of hiding what she wanted and decided to go after it. Duke was sexy and manly and just gruff enough to tickle my fancy.

Posted by Miss Boxy Frown at 11:41 AM No comments: 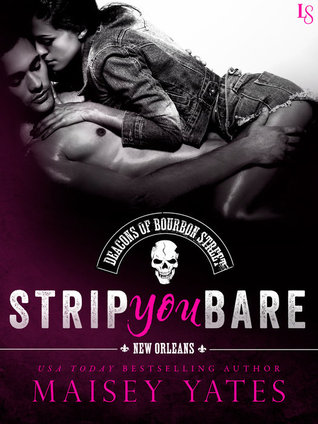 Micah, road name Prince, is the last Deacon to get his HEA and Sarah Delacroix is a perfect match for him. When the Deacons discover that they own the deed to the old Delacroix mansion, it is Prince's job to investigate and find out why. What he finds is Sarah, who is trying to bring some respectability back to her family name after some family scandals. Prince wants to do his part in investigating their President's murder, then get back to his high rolling life in San Francisco; Sarah doesn't know how long he will be around but she knows that she has to throw caution to the wind and have a taste of this biker in a tailored suit.

Micah and Sarah were fun to read. They had the best chemistry and sexual tension, although Blue and Red are a close second to that. There were some super steamy scenes between the two of them! We also get answers to the questions that have been asked over the course of the 4 books, as well as some surprise reveals. New Orleans herself was a great character in all of the novels, from sights and smells to her people.
Posted by Miss Boxy Frown at 11:10 AM No comments:

In this compelling read, Tucker is released from jail, hellbent on revenge on the chief of police who got him sent away. The problem? The chief is is father, and while he may be an upstanding member of society, Tucker knows all the dirt and has suffered from the secret hell of living in that house. Morgan should be celebrating her 21st birthday in style; instead she gets dumped by her boyfriend who has been cheating on her with her supposed best friend. When she runs into Tucker at the local convenience store, she is in for more than she bargained for.

This was a great read, with a lot more depth than you expect from the blurb. Tucker is not your average bad boy, and Morgan is not your typical spoiled little rich girl. Each of them has layers that are revealed through the course of the book, and the resolution has your flipping until the last page.
Posted by Miss Boxy Frown at 6:59 PM No comments: