Review: Whatever it Takes by Lindsey Pogue 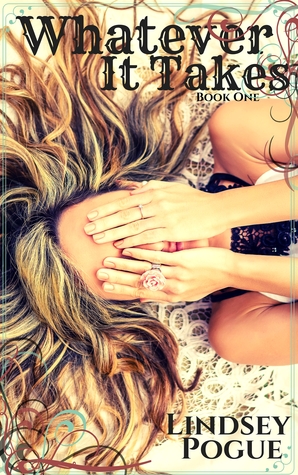 This review is criminally late, but I promise that is not a reflection of the captivating story told in Whatever it Takes.

Sam has been living life by going through the motions; between dealing with a tragic accident that takes her father's life,  learning to live with her new stepmother and dealing with the haunted memories of her complicated romantic life, Sam has literally gone numb over the past several years. There is only one way she can allow herself to feel, and that way is damaging to her body and her mind. Luckily she has her father's farm and her two best friends, Nick and Mac, to keep her grounded.

Reilly comes back to town. Firmly entrenched in those messy romantic memories, at one time Reilly was the love of Sam's life, but his life had it's own complications, and in order to get away, he went to the military. Feeling abandoned, Sam moved on but several years later, he has come back and his presence has thrown Sam for a huge loop.

This second chance new adult romance is as always beautifully written by Lindsey Pogue, messy and complicated in the way real life is, and enthralling, the way true love is. Sam isn't perfect, and is perfect because of that; in fact sometimes she frustrated me to no end and I realized it was because I liked her and wanted her to make different choices. That in itself is very telling of how much I was pulled in to the story, and how realistic the storytelling is here. What a great read, especially if you are a fan of the new adult genre!
Posted by Miss Boxy Frown at 11:34 AM 1 comment: