To Me, This Movie is Trash: Joker (SPOILERS) 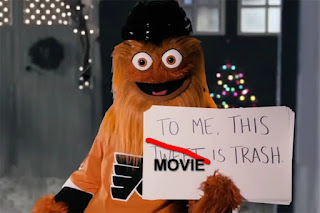 I was nervous about seeing Joker. The release of the film was preceded with over the top accolades, Oscar buzz, and lengthy standing ovations. Every clip and trailer I saw promised Joaquin Phoenix would be dancing maniacally, laughing maniacally, and dirty. It seemed to be the Siren Call of the White Guy. Todd Phillips clarified that call with his silly statements about leaving comedy. (But did you DIE Todd Phillips?) I like the character the Joker. I was interested in seeing what a great actor like JP would bring to the Joker. I liked that it was supposedly in no way connected to the current DCEU movies. I tried to be optimistic. I went to see Joker. SPOILERS from here on out.

Things that were excellent about Joker
Gotham. Specifically Gotham in the 80's. The grit and grime of the city, the people, the clothes, the opulence of the rich, the attention to every detail, including the old Warner Brothers logo. It was a flawless execution done so well, it looked like a movie FROM the 80's. Hat tipped.

Joaquin Phoenix. To be clear, all of the acting in this movie was great. JP gave 110% to his performance and the supporting cast all showed up and showed out.

The homage to Taxi Driver and Scorsese. So many deliberate and intelligent choices were made here in service to an homage to Martin Scorsese, and the result is a beautifully shot and cleverly filmed production. The portrayal JP gave as a man with mental illness and SOME of the ways it was handled on film were great.

Um. I guess that's it. I have heard some people say they liked the score but I don't remember it.

Things that were Trash about Joker
The "twists"
Apparently the twist that Arthur Fleck was in fact NOT dating his beautiful neighbor Sophie, played by Zazie Beetz, was shocking to many.

He followed her all day and imagined that she would a) just knock on his door and be cool with that creepy shit and b) come see him do a comedy set. Nah, bruv. If she was actually dating him, I would have been even more upset but there is no way on Beyonce's internet that Sophie was dating Arthur or letting him around her child. She knew who the fuck he was because you keep track of crazy people when you are a single mom.

Speaking of moms - so many unanswered questions about where he was while his mom was committed...I don't really care. He ends up being adopted but they have similar delusional mental illnesses, which was strange.

Then there were the did he or didn't he twists (?). Did he actually shoot Murray Franklin? Was it a delusion? How much of the movie was accurate? Joker has always been an unreliable narrator, so in a way these questions are valid. However, my mind wasn't blown by the Inception-ness of it all. Arthur was a sad, sickly man who at best, may have accidentally ignited a movement and at worst was delusional and homicidal (but also still sad and sickly.)

The way Black Women were portrayed
From the beginning, my Black Lady Suspicion Meter (c) was going off. How the movie managed to create these opportunities for wonderful actresses and then throw them into these classic tropes is just disappointing.

In the trailer, a frowny Black woman on the bus snapped at Arthur and told him to quit bothering her adorable son, who was turned around in his seat facing Arthur. "How odd." I thought. "There must be more context to that in the movie."

That woman on the bus must have already known what I didn't know - that Arthur was not suitable to be around her son. She was the physical representation of the way the world responded to Arthur packaged as a Sassy Black Lady.

Then there was his social worker, who was overworked, underpaid, and tired of Arthur's shit. She was the physical representation of the system failing Arthur, and we are meant to feel that her apathy is letting Arthur down, too. She was doing the best she could and Arthur needed more from her. And now we have a Mammy trope.

The stunning Sophie, who was his object of fixation as he created a fictional relationship with her. Forbidden Fruit. *eyeroll*

The psychiatrist at Arkham, who might as well have worn a t-shirt that said Magical Negro. I'm so tired. And he killed her off-screen.

Separately these characters wouldn't be so irritating, but together they create a tableau of tired ass writing from men who should know better.

The writing and indulgent pace
Speaking of writing...this movie had clever moments, and was written like it knew it. It was like someone smirking at you waiting for you to get the joke, but the joke doesn't make sense. Why would Murray let an obviously unhinged man get on his show with clown make-up on, when the lower classes are revolting in clown make up? Why would he not kick him off when he grabs Dr. Sally and kisses her against her will? Who took care of him between the time he was adopted and his mother was committed? This movie is not nearly as clever as it thinks it is.

I can't count the number of times I sighed and was ready for certain scenes to just MOVE ON. There were moments of levity, but there were also moments of unintentional comedy. I'm mystified by the fanboys who had a life-changing experience by this movie.


The comic connection
This film was touted as an independent Joker movie, separate from the DCEU, and I assumed (incorrectly) that is would have nothing to do with the Wayne family.

Thomas Wayne was a gaping asshole in this movie. He was an elitist snob, a take I hadn't heard of before. Why did we have to YET AGAIN see the Waynes murdered? Why did Joker have to meet young Bruce at all? He didn't actually kill the Waynes, and he wasn't Bruce's illegitimate brother (as his delusional mother believed.) In the end, it was a waste of characters and time for a scene we have seen a thousand times. How many ways can pearls drop??

I had to write this up. I'm sure people may disagree and I'm happy to discuss. I was wholly unsatisfied with my movie experience, but in the end, Joaquin Phoenix did an exemplary job in a movie that would have been more compelling if it had no comic connection at all.

Posted by Miss Boxy Frown at 3:57 PM No comments: Links to this post

Review: That Kind of Guy

That Kind of Guy by Talia Hibbert
My rating: 5 of 5 stars

This was a wonderful ending to a series I adored. Zach has been on my radar for a while so I was extra pleased to see him with Rae, a divorcee of a certain age (ok my age) with her wicked facial scars to boot. It was fascinating to read about demisexuality, which I was not familiar with.

Rae and Zach are good friends, but Rae has been harboring a lust-crush for the younger and extremely hot Zach. They end up hatching a plan for him to be her pretend boyfriend at a writers conference where Rae's horrible ex husband will also be in attendance.

Such a fun and sweet read. Also, Duke the dog is a Very Good Boy.

View all my reviews
Posted by Miss Boxy Frown at 11:48 AM No comments: Links to this post

Hate the Game by Winter Renshaw
My rating: 4 of 5 stars

I'll admit my hopes were not high for a hero named Talon and a heroine named Irie.

However, I am pleased to report that I was pleasantly surprised. The unfortunately named Irie was a smart cookie, knew exactly why Talon was after her, and didn't let her lust get in her way...for about 3 and a half years. The author was very smart in making Talon a fleshed out, 3 dimensional character with issues of his own and gave him a full arc. Irie almost had the same treatment, but I was a little let down by her arc at the very end. There is an HEA, so no worries there.

Talon and Irie had great chemistry, and Talon was as respectful as a relentless, single minded young man could be in this situation, which I appreciated. If you dig a frenemies to lovers story, this would appeal to you.

View all my reviews
Posted by Miss Boxy Frown at 11:45 AM No comments: Links to this post

Sparrow is the unwilling bride of notorious Boston badass Troy Brennan, The Fixer. Despite his cold reputation, Sparrow still manages to give as good as she gets from him, and he respects her all the more for it. There are tons of secrets and lies that weave their way around this book, and when Sparrow and Troy finally come together, the sparks fly. I was riveted. Great page Turner, hot scenes, well written.

View all my reviews
Posted by Miss Boxy Frown at 5:12 AM No comments: Links to this post

The Right Swipe by Alisha Rai
My rating: 5 of 5 stars

If you haven't been reading Alisha Rai, do you even like romance?

Rhi is a romance app designer that used her app and found the one night stand of a lifetime. Unfortunately he ghosted her and turns up months later as former pro footballer Samson Lima, who is now the spokesman for a rival dating app-one that Rhi wants to acquire.

The chemistry between Samson and Rhiannon is a perfect mix of spicy and sweet. I adored them together, and there is a tie in to Alisha Rai's previous series! Seriously, it's fun and cute and so hot. Read it.

View all my reviews
Posted by Miss Boxy Frown at 5:11 AM No comments: Links to this post