Review: Beyond Ecstasy by Kit Rocha 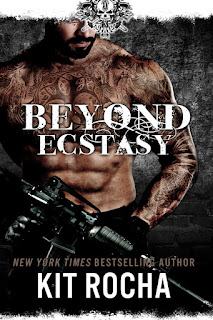 The sectors have been gearing up for war with Eden's army, and in the midst of war, Jeni and Hawk come together in the way only the O'Kanes can - in a passionate mad jumble of emotions and chemistry.

Jeni is one of the famous dancers at the Broken Circle bar, and Hawk is a smuggler and fairly new recruit to take the O'Kane ink, having moved over to Sector 4 from the farms in Sector 5. These two have watched each other for months, and as the war goes from being a looming possibility to a reality at their doorstep, Hawk wants to claim Jeni permanently...since the prospect of war could mean that permanently could end up being a very short time.

Fans of the Beyond series will love Jeni and Hawk! New readers will love the action, adventure, and erotica in the Beyond universe...and as I said before, catch up! Only one more book left in this series! 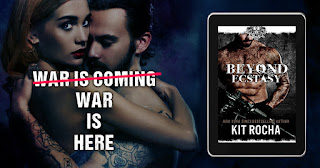 The O’Kanes have a reputation for working hard and playing harder—except for Hawk. He joined the gang with one goal: to ensure his family’s survival through the impending war with Eden. It’s been years since he had the luxury of wanting anything for himself. Now, he wants Jeni. From the first moment he saw her, he’s been obsessed with making her his. Not for a night—forever.

Jeni’s been lusting after the former smuggler for months, but he keeps shutting her down. She’s almost given up on getting him in her bed when he offers her the last thing she ever expected—a collar. Accepting it means belonging to him, body and soul. It’s a reckless gamble, but Jeni can’t resist the chance to slip under Hawk’s armor.
The only thing more shocking than the dark, dangerous pleasure they discover is how right it feels. But falling in love is even more reckless when forever is far from guaranteed. Because they aren’t just at war, they’re out of time—and every breath could be their last.

Posted by Miss Boxy Frown at 10:23 AM No comments: